The microcontroller used in embedded system design is primarily focused on control capabilities, where integration is the primary objective. Based on the target application, chip designers will incorporate different degrees of memory, input/output interface, and computational ability into a single controller. In order to gain market share and a competitive advantage, chip designers, whether they are designing for 8-bit, 16-bit, or 32-bit microcontrollers, need to constantly innovate to satisfy the needs of their customers. Microcontroller technology has improved to include analog support, new peripheral support, better operating efficiency, improved specifications, a smaller form factor, and better technical support.

Based on its ease of use, low cost, high bandwidth, stability, security, and compatibility across devices, Ethernet has become the de facto standard of network access, surpassing that of both SOHO and enterprise networks and expanding into the consumer electronics market. The proliferation of M2M communications anticipates a rise in Ethernet-capable microcontroller market. 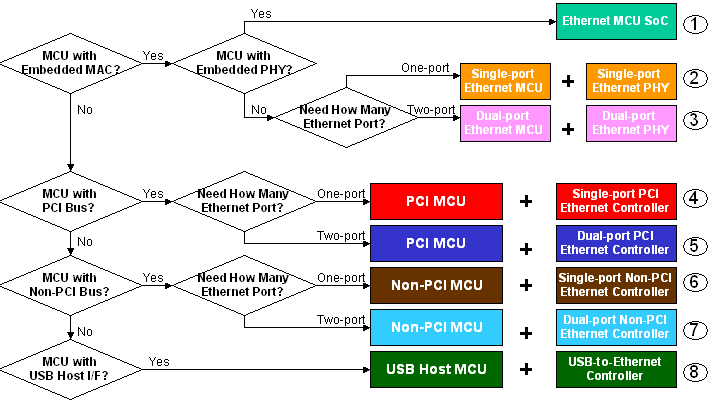 Figure-1 Which Embedded Ethernet Solution is Right for Your Design?

There are eight distinct configurations to embed Ethernet based on the input/output interface (Figure-1). The designer chooses the appropriate configuration based on the interface needs of the target application. The first three scenarios feature a microcontroller with an integrated network controller; of these, the first scenario features the highest degree of integration. The remaining scenarios (four through eight) do not feature an integrated Ethernet controller, and are able to interface with an external network controller through a serial (i.e. USB host) or parallel (i.e. PCI or non-PCI local bus) interface.

The first configuration in Figure-1 was once only possible with 16-bit and 32-bit microcontrollers, but the technological advances of the 8-bit microcontroller has allowed it to capture more of the market with smaller form factors and higher integration. Applications that once required a 32-bit microcontroller can now be powered by the lower cost, highly integrated and higher capacity of 8-bit network microcontrollers. To meet market demands, ASIX Electronics announces the world's smallest 8-bit Ethernet microcontroller, the AX11005BF (Figure-7), the first of its kind to feature 8x8mm 80 footprint TFBGA packaging, embedded MAC and PHY, TCP/IP accelerator, and 512Kb flash memory into a highly integrated chip. The AX11005BF is the smallest and most powerful solution for embedded Ethernet applications – designers can take advantage of its high capacity, low power consumption, and simplicity of design to lower PCB and material costs as well as shrinking device form factor.

The following elaborates on the three types of solution depicted in Figure-1: The Non-PCI solution, the USB solution, and the more powerful Single-chip solution.

Networking with a Non-PCI Microcontroller

The configuration in Figure-2 targets embedded systems without a PCI-bus but featuring a non-PCI or SRAM-like interface. This design can embed a MAC and PHY layer in the Ethernet controller to provide network access, such as the eighth scenario in Figure-1. Since the majority of microcontrollers provide the non-PCI local bus, this can provide a single-port network capability. 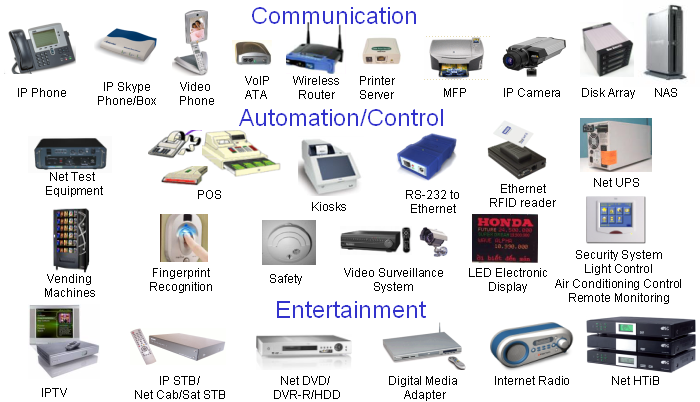 Figure-4 depicts the configuration for microcontrollers with a built-in USB host with either an internal or external USB to LAN controller, such as the eighth scenario in Figure-1. This configuration converts USB 2.0 to Fast Ethernet / Gigabit Ethernet in the embedded system through a cradle, port replicator, or a docking station. Because USB 2.0 only requires 4 pins, this allows the non-PCI bus to decrease the pin-count between the embedded system and the cradle or docking station. An alternative configuration uses a built-in USB host in combination with an external USB-to-LAN dongle to provide Ethernet access. 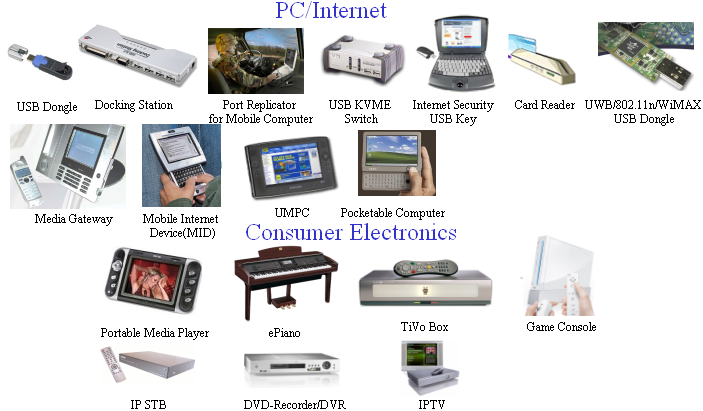 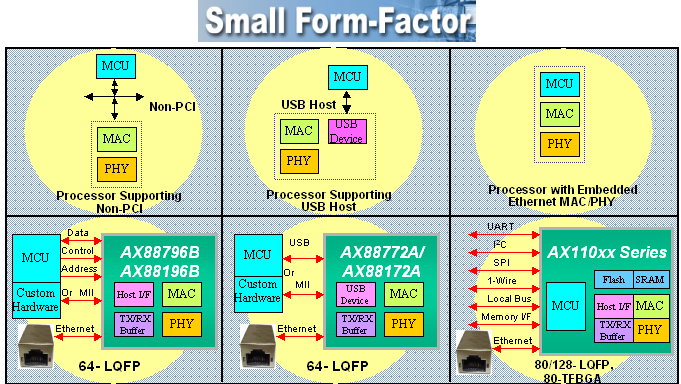 Satisfying the Market Demands for Miniaturization

Embedded system designers are frequently faced with the dilemma of designing a remote management or communication device with higher specifications and functionalities without increasing its form factor. Chip vendors have provided a variety of solutions to this dilemma, one of which is by choosing a small package size. The 64-pin or TFBGA package depicted in Figure-7 allows the ASIX chip to be a quarter of the size of a US dime coin. An alternative solution is to incorporate a higher degree of integration in a single chip – Figure 7 (right, bottom) depicts one such chip that integrates Ethernet MAC/PHY, TCP/IP accelerator, and Flash memory into a single small form factor Ethernet microcontroller SoC.

The three scenarios described above offer alternative solutions to embedding Ethernet to satisfy the different needs for application designers today, whether they use a Non-PCI interface, USB interface, or Single-chip solution. ASIX's AX88796B/AX88196B (Non-PCI), AX88772A/AX88172A (USB-to-LAN), and AX110xx (Single-chip SoC) solutions offer high levels of integration and a small form factors to meet the market's demands. 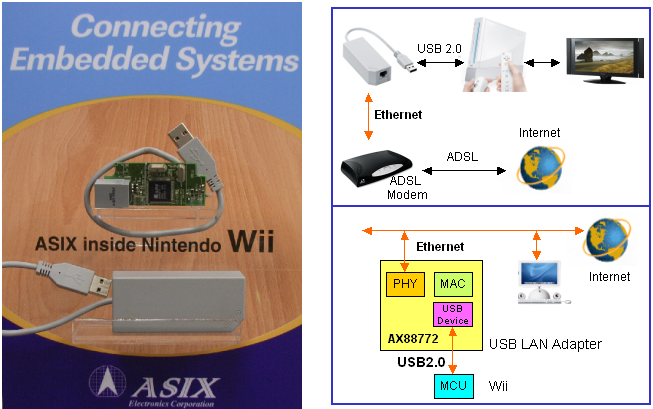 Nintendo released it's home gaming console, Wii, to the US market in November 2006 to high critical acclaim and strong sales – Wii consoles are still sold out in most stores today, months later, and are gaining even more momentum with new peripherals such as the Wii Balance Board. The Wii's main processor is IBM's PowerPC 750CL, based on the Broadway architecture and manufactured using the 90nm SOI CMOS process. The Wii's networking capabilities include built-in Wi-Fi 802.11b/g, but for homes without Wi-Fi or for users who desire the performance and stability of Ethernet, Nintendo offers a USB to Ethernet dongle, which adopts ASIX's AX88772 USB-LAN Adapter Solution, depicted in Figure-8, as an accessory for purchase.

The current networking capabilities of the Wii include: news and weather reports, email, Web browsing, Mii sharing, and games and software downloads. Nintendo has also released the WiiConnect24 service to download news and data when the Wii's main processing is low, that is, accessing the Internet to download data when users are not gaming.

Japanese Internet company, Dragonfield's online video sharing community, DOGGA, has also secured a spot on the Wii's homepage as "CGM TV! DOGGAWii" to offer YouTube-like services. Through the Nintendo Wii and ASIX's USB LAN adapter, gamers and users alike can browse the most up-to-date and entertaining videos from the DOGGA community.

The Market for Microcontrollers in Embedded Networking System

Amid the rise of M2M communications, the importance of networking capable embedded systems can be seen in the strong sales of the Nintendo Wii. Other telecommunication applications on the rise include IPTV and MOD, boosted by the rise of broadband connections and new forms of e-commerce. Consumers may one day have thousands of channels to surf from, quality hi-definition content, and new forms of interaction and communication. The market for high capacity network controllers is likely to experience heightened demand in the foreseeable future.